So this will be the first of several posts, well, it’s sorta the second, this heavily relies on the Script I posted for writing values to registry & WMI a few posts ago, however I’ve made several modifications to it since then, and have done A LOT of testing. Hence my last post about testing Low Disk Space machines.

That’s a really quick overview of how we’ve setup WaaS, we went over this in great detail @ MMS, and I’d expect Mike Terrill to eventually blog that detail, I just don’t want to steal all of this thunder, but felt you needed a little overview to explain where this TS fits in.

Update 2018.08.01 To include Hard  Blocker from  Compat Scan, requires you to add a step into the TS to capture the Hard  Blocker to a  TS Variable,  Blog Post HERE

Update 2018.06.05 - I've posted the first WaaS Post, which incorporates this Script into a Compatibility Scan Task Sequence.  I've updated the script since this post, which is available to download, along with the Task Sequence Export in this POST HERE

Several years ago I started to use Jason Sandys’ OSDInfo Script.  I liked the idea of having a script run during OSD that would write information to WMI, which made it easy to inventory.  Now I do IPU (In Place Upgrade) so much more than OSD, and I wanted to do the same, gather important information from IPU and be able to use it for Reporting or creating collection queries.

I’ve taken Jason’s script and modified it… a lot.  All of his plumbing is still in place (functionality to add information to WMI & Registry), but I’ve added a lot of logic around using the script for different functions.

The script is now broken into 3 sections, OSD (Operating System Deployment), CS (Compatibility Scan), IPU (In Place Upgrade).  Using TS Variables, the script will run different sections of the script.  This allows me to use the same script in numerous scenarios.
First, I’ll show you results, and then go into details about how it’s done.  But I feel it’s easier to understand the script and process if you can see the end product.

Updated 1/31/2019 - Updated Script to work independently of XAML Form, you can use the last script to send text / email by running the script and using arguments: SendTextEmail.ps1 -UserEmail gwblok@garytown.com -UserCell 6512015555 -UserCellProvider Verizon

Updated 3/6/2018 - added auto close feature, so if user ignores the window, it will auto close allowing the TS to continue. (Updated the 3rd Form image below to reflect the change)

Or if some of you awesome PowerShell guys want to make my code pretty and add that feature...  🙂

As I try to improve the user experience for in-place upgrades, notifications came to mind, and how to incorporate that into the process.  Using the TS variable _SMSTSUserStarted = true, I launch a powershell driven “front end” to collect the user’s email, cell number & provider, then use that to notify user when process is complete. 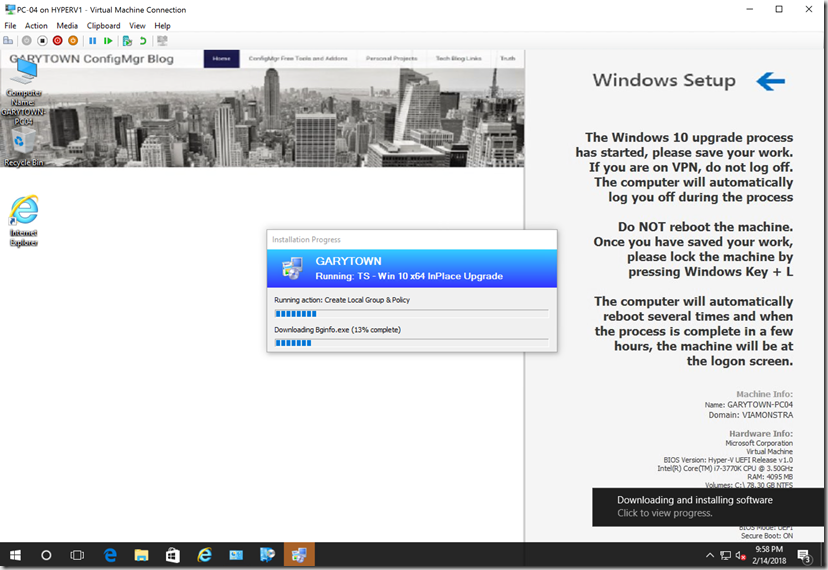 If (You Enjoy Reading)

{
I thought that was a clever title, but it seems more confusing the longer I look at it… anyway, this is the follow up post to take BGinfo from MDT, and add it’s capabilities to the ConfigMgr In-Place Upgrade Task Sequence Process.  If you’ve been working with in-place upgrade task sequences, you’ll know they are a different beast than regular OSD.  You can’t just call an application and expect it to show up on the screen.. like in OSD, you can say Command Line Step: notepad.exe… and guess what, a notepad.exe window opens during the TS.. freaking amazing!