If you're using Dell machines, you might be able to forget how to import drivers moving forward.  I've tested this new method with several Dell Models, and so far, It's been working well.

Place the Step after the TS reboots back into PE, but before it's captured: 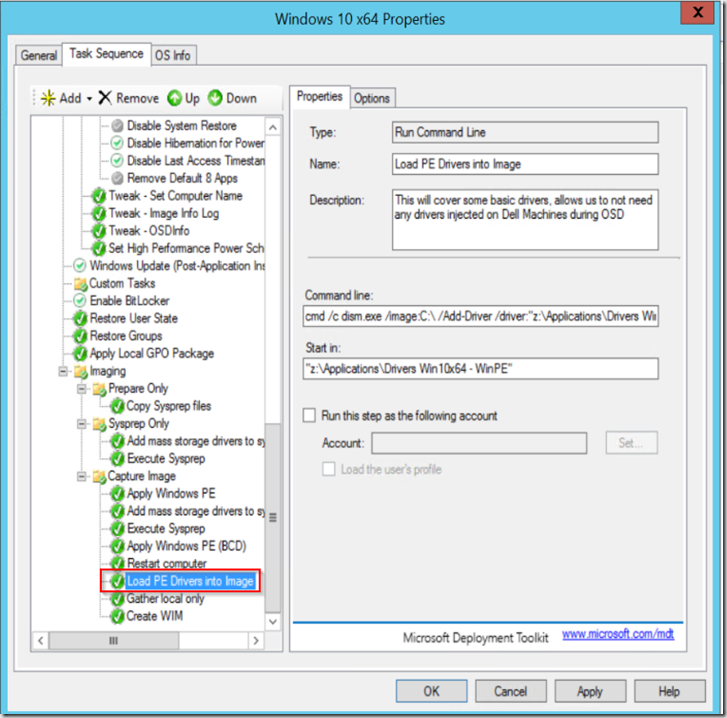 Here is my folder of the drivers it injects:

I've added an additional driver (Security Folder) that Dell Command Update didn't get, it was for the fingerprint sensor on the E5470.  I grabbed the security folder out of the CAB for the E5470. (Probably fixed the issue on some other models before I tested them)

If you don't want to add it to your Build & Capture, you can create a normal Package with the contents of the folder, then reference that during your ConfigMgr OSD TS:

Either way will work, I've just chosen to add it to my Build & Capture since I'm 99% Dell Shop, and then it saves even more time when deploying a Dell. (However I'm testing on HP, and it seems to be working... I'll Post later if I can get the HP Updater Software to work right)

Then towards the end of my TS, I have 4 Steps that Installs the Command Update Software, Applies Settings, and Runs it, then reboots. - Will get into more details later.

You'll need to Create your Settings XML Settings File, install the software on a Dell machine, launch it, configure the settings, then export it.  VERY IMPORTANT.  YOU MUST CHANGE THE PATH otherwise it will FAIL during OSD.

Now that you have your Package w/ your Dell XML File, you can add the steps to OSD.

Now when you image your computer, it will only have the bare driver installed until it runs the Dell Command Update, where it will check for the latest Dell supported drivers and apply them to your system.

Takeaways.  For New Windows 10 Machines, we've switched to this model.  No more downloading Dell Driver Packs and applying drivers.  Just Injecting the Core Drivers into the WIM, then running Dell Command Update to get the rest and Update to the latest Dell Supported Drivers.  On Windows 7, we still use the Dell Supplied Driver Packs, but run Dell Command Update at the end of OSD to update NIC / Video and whatever else it can find.

This is great for testing new Models, instead of taking time to import the drivers, just image it and Dell Command Update will do it's part to get you far enough along.

There are still quite a few bugs in Dell Command Update 2.1.1 that I've been reporting, and I expect with each new version, it will be better and better.