This Post is part of a larger WaaS Process series.. WaaS 1809 TS Collection

During the WaaS Process (The One Provided here at GARYTOWN, this is ALL CUSTOM), there are several keys and values that are written to the registry, most are used for reporting and a few are used for scripts to pull info from.  Here is a subset of the keys used.  This will be a typical setup of a computer that ran through the process from start to finish with no issues. 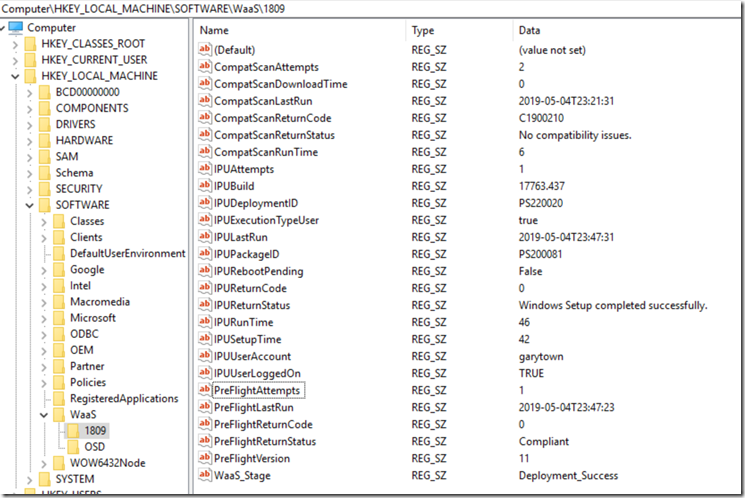 I’ll try to update this Post with additional example of the various scenarios as I get time.

Different Parts of the WaaS Process that write values include

Other Keys & Values used but not for reporting.. just for scripts to reference.

Most keys will live in (HKLM\SOFTWARE\WaaS\Build#), however some keys not used for reporting, but for the process to use as triggers & waypoints, are located in other locations.  I tried to note those below.  I’d highly recommend after you run each process, that you look at the registry to see what is going on.  If you want to change any of the locations or names, you’ll need to update the scripts.  Please look through the scripts before you run them, there are defiantly scripts that should be updated for your environment, or you might find some things unexpected after.

Ok, I think that is all of the registry keys we use during the process.  If you find additional ones that I missed, let me know and I’ll confirm / Deny that we created it.

As you can see, the WaaS 2.0 process has many moving parts and it can be a bit overwhelming how they all fit together.  In a future blog post, I plan to diagram out the Task Sequences, scripts, etc. 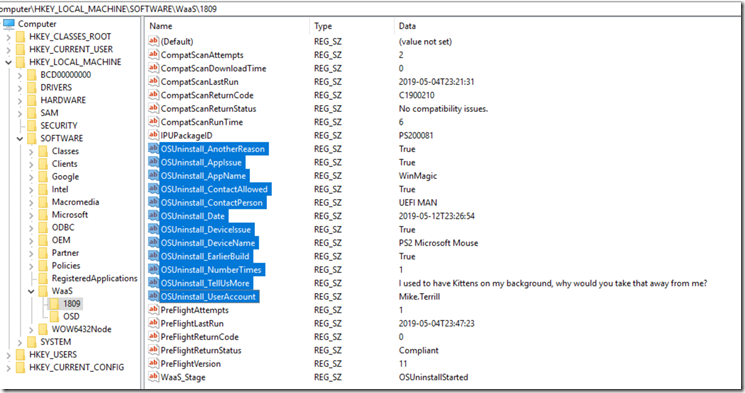 3 thoughts on “Registry Values used in WaaS Process for reporting”