I’ve created messages and pauses a couple of ways, a “fancy” way with content, based on Niehaus’s blog, and a simple way just using notepad with no content, which is really handy during times you don’t want (or not able) to pull down content yet.  Nash (@kidmystic) would say to use PowerShell (example at bottom), as he has a nifty one line code that will do it for you. However, if you don’t have PowerShell in WinPE, and want to keep it super simple, just do it this way… with notepad.

In the Task Sequence, where you want to create a pause, or message, create two “Run Command line” Steps.

This will work even if the HDD is not formatted, as it does not require content.  To Confirm, I Diskpart –> Clean the HDD so nothing was on it, then ran these steps in WinPE.  Worked perfect.  This is great for if you want to pause / blow up your TS early if it it fails any validations, like Bios Password Missing, or UEFI not enabled, etc.

When you close the Notepad Application, the TS will Resume.

- Set your Exit code to what make sense.  Exit 1 will “Fail” your TS and make it quit, which might be good in times that you want it to fail so something manually can be done. Exit 0 will be success and continue on. 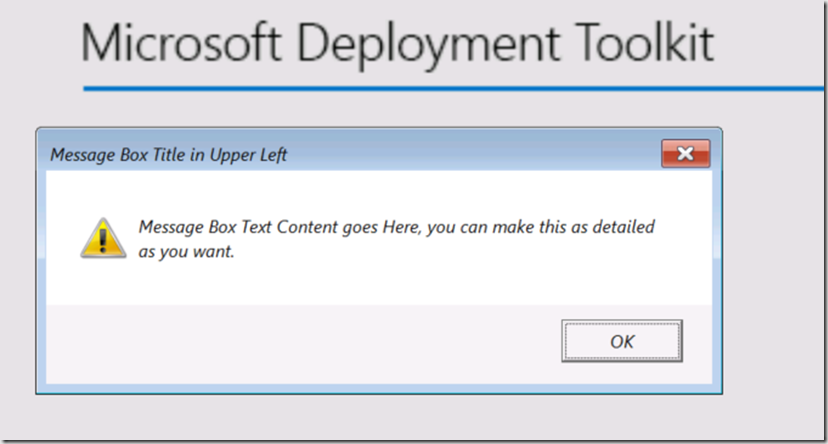 During IPU (NOT OSD, but when running a TS post OSD, and in Windows), you'll need to use ServiceUI, steal it from the MDT Toolkit.

7 thoughts on “Task Sequence Message / Pause with No Package”