I set this up a couple weeks ago and have been meeting to write something up.  Then before I could, Peter over at syscenramblings posted a nice how to HERE.

I’m going to post mine anyway, even if it’s not as fancy.  I’ve been going with the “KISS principle (keep it stupid simple)” model for OSD, and it’s been working well for me.  So while sure, you can do it in one step, I’m going to show you how to do it in several additional steps, but no packages are required.

All information used to create these steps were based on this information: https://technet.microsoft.com/en-us/itpro/windows/keep-secure/credential-guard
I did find what appears to be a discrepancy in their documentation, I make more notes at the bottom.

My Example is done on a New Dell Laptop
UEFI & SecureBoot Enabled in Bios.
My Credential Guard Setup is:

I’ve got two sections in my TS setup for this, one Group that installs the Windows Components, and another that sets the registry keys.

Just make sure you get a reboot in there, I got a few reboots in my TS between the first group and after the last group for other processes in the TS, since I already had reboots for those steps, I didn’t need to add any additional.  I would suggest doing what Peter illustrates in his post to add a reboot outside of the Task Sequence, I’ve been doing this for a couple years to resolve other issues at the advice of Johan during one of his sessions.  Peter’s Blog shows a nice illustration of how to set that up.
After First Logon, I double check msinfo32 to confirm that indeed Credential Guard is running with the settings I wanted.

One thing I’ve noticed that seems to be a discrepancy in the TechNet article. 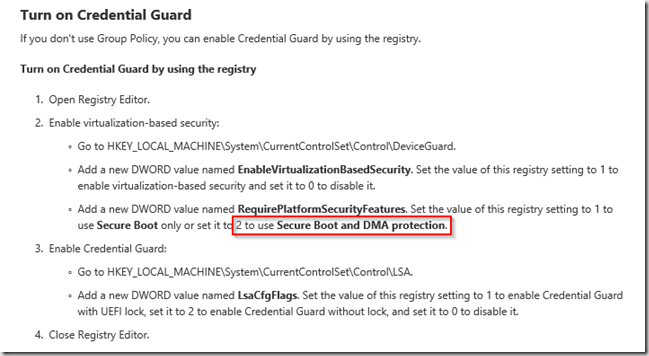 When I set the RequirePlatformSecurityFeatures  to 2, it does not list Secure Boot 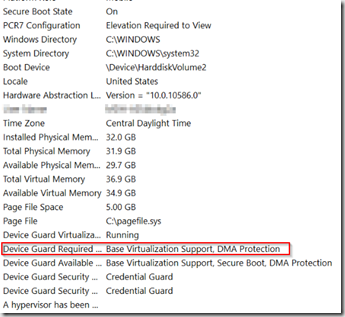 However, if I set that key to 3, it then reports: 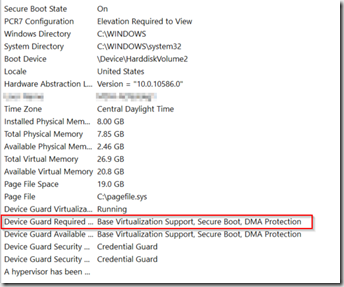 While I honestly don’t know if this makes a difference, I’d really like it to show up in msinfo32 correctly.  If you set the setting via Group Policy and NOT OSD, it does show correctly, and it will set the Registry to value 3.  So that’s what I’m going with.

PS.. I also have it setup in Group Policy using the settings outlined in that article for the Machines that were Imaged before I implemented this.  After imaging, and group policy applies, it does “fix” the registry keys you set during OSD, and it will show up in msinfo32 correctly.  I’d just let to get it right out of the gate instead of having to wait for Group Policy to kick in and reboot the machine.

Group Policy will also add the registry key HypervisorEnforcedCodeIntegrity ,which I’m not setting at all during OSD.
Here are the settings from machine setup via Group Policy post OSD

Here are is one that is setup through OSD before Group Policy updates it:

I hope you find this useful.

For the Machines that I had already deployed, I used Group Policy to enable the Settings, and pushed out a “Application” to finish the setup. 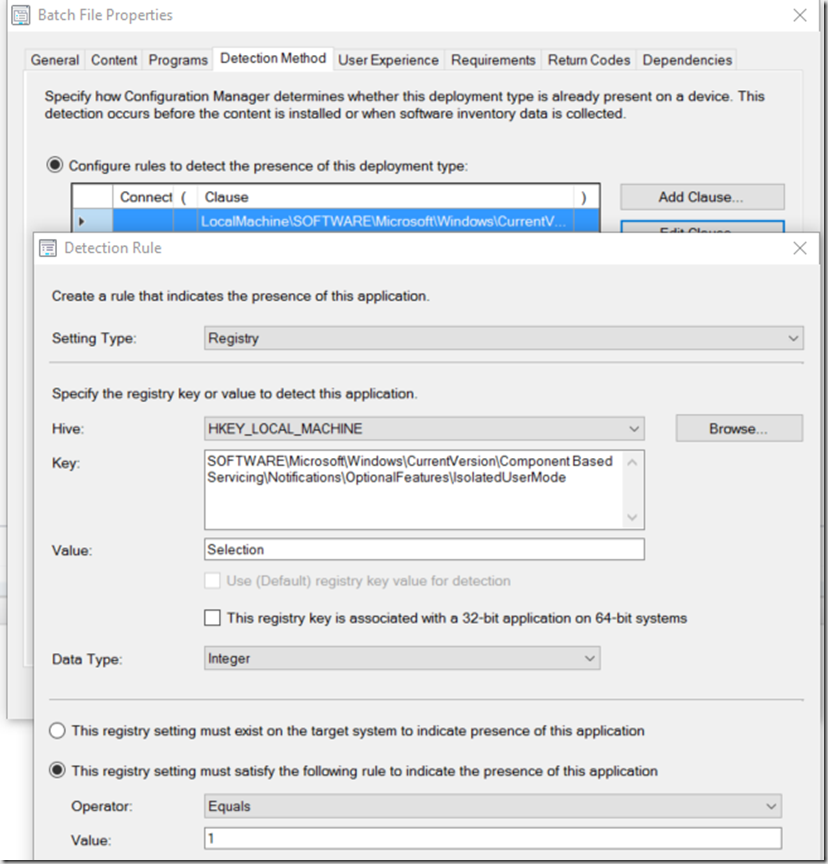 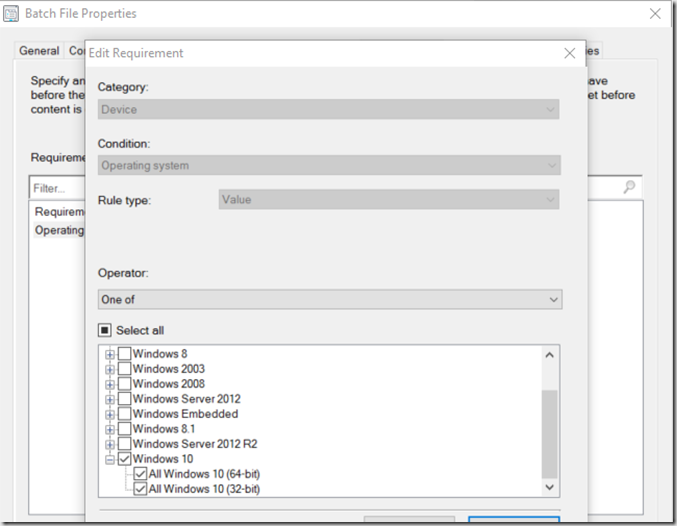 I changed Return Code 0 to “Hard Reboot” so when it’s done it would request you to reboot, so it could finish the Feature Installs, the Detection Method will also fail until after the reboot, as it is looking for the Feature IsolatedUserMode to be enabled in the registry.

Batch File: You don’t need the registry info in there, but incase you want to set this up without group policy , just add the keys.  I had it set that way so I could test before using Group Policy.
---------

I only had to enable the feature IsolatedUserMode because I have HyperV enabled on all of my Windows 10 machines by default in OSD.  If you didn’t do this, you can modify that line to look like:

Hope this was useful.  Feel free to leave a comment.